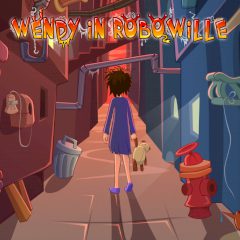 Roboville is the best place to live together for people and their creation - robots. For years people and robots have been working for each other's sake and for the sake of their city. Robots were creating buildings and difficult constructions, doing routine work, and the thankful people were improving them, making them more and more human-alike. So alike, that a peaceful collaboration turned into a serious conflict, having trned Roboville into a robot-only city. Our story will be about a girl named Wendy, who is the last non-robot in the robot city.

Play Indiara and the Skull Gold

Indiara and the Skull Gold

Girls visit mermaid sauna to chill out. Prepare for sea procedures and see how they differ....

Play Rapunzel Getting Over Flynn

Rapunzel Getting Over Flynn

Rapunzel wants to recover after relationships and she knows a way. Prepare for a makeover!...

In this game you will search for differences in the pictures that are very scary....

Play Quest for the Secret Library

Quest for the Secret Library

Find items and use some of them to complete the quest and enter fabulous world!...

Every household should be clean. You need to take care of all aspects....