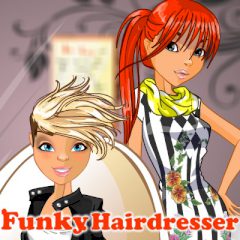 Funky style was especially popular in the 1990s, but this doesn't mean that no-one wears it in the 2000s. You went to the hairdresser's and asked for a new hairdo in funky style. Prove that you are a true fan of such music bands like James Brown, George Clinton and Sly Stone! Remember that clothes and hairstyles are really one of the ways of self-expression.