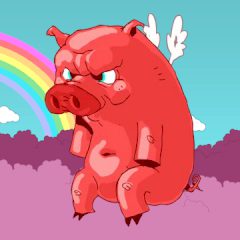 After Superman has retired, a new wonder appeared in the world - the flying pig! Discover the powers of this marvellous pig as he sets teleportation portals, walks through the walls and escapes from the scientists of the scientific research center where they want to try to contain this super swine.

Collect stars on your car....